Skip to content
Play Classic Nintendo Games with these Best N64 Emulators for Android, Windows, and Mac to Enjoy the Popular Games for Free. 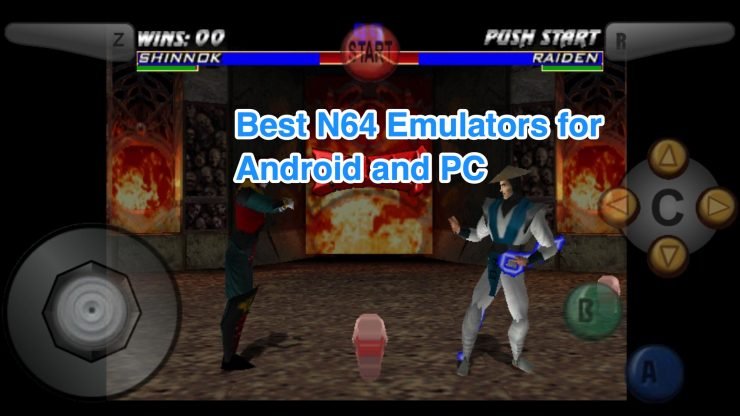 While the Xbox, PlayStation, and Stadia are noteworthy players in the gaming industry, things were quite different a couple of decades earlier. The Nintendo N64 was the pioneer in the console gaming industry and no one could argue about that. Dubbed after its 64-bit central processing unit, it had some of the most popular and interesting games that you could think of.

From Super Mario and Donkey Kong to the Legends of Zelda, you name it and they had it all. However, while Nintendo has continued the nostalgic ride for the NES Classic, there seems to be no such plan for the N64 emulators. But fret not. In this tutorial, we have listed the 10 best N64 Emulators that will give you the ability to try out your favorite Nintendo classics right from your PC or Android smartphone. Let’s check it out. 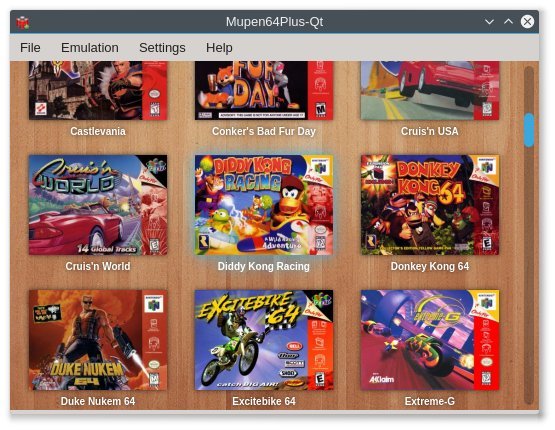 One of the more popular entries on this list, this has managed to attract quite a lot of loyal fanbases in a short span of time. One major reason for that is its multi-platform support, including Windows, Mac, Linux, and Android. One thing that might give some users a hard time is the fact that it doesn’t have a user interface to load your games, rather you will have to make use of a command line.

But it has also addressed this issue by providing the M64Py plugin (that you need to additionally download). Then there is also an online version of this emulator. Known as Mupen64plus Online, it has all the features that its standalone application has to provide, with the added advantage that you don’t need to have it installed on your PC. As of now, this online build only supports Firefox, with CHrome support in talks. 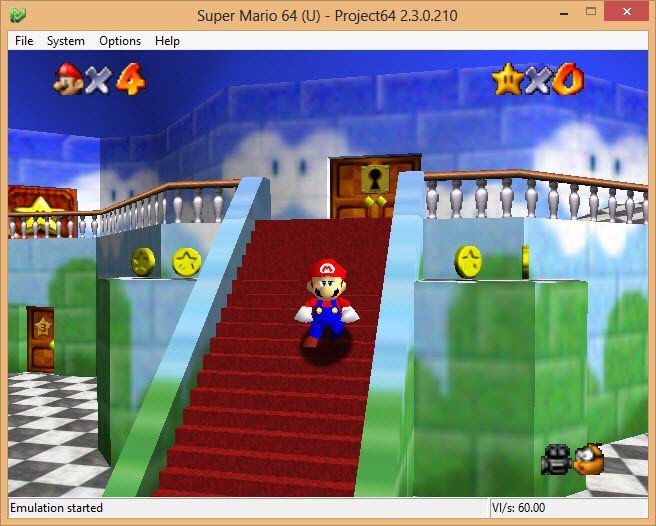 This open-source emulator is completely written in C + + and supports both the Nintendo 64 and 64DD. It beholds tons of customizations, including the ability to customize the keyboard controls as per your requirement and tweaking the graphics settings to give yourself the best gaming experience.

Add to the fact that also supports an external USB gamepad, and there’s not much we could have asked for. Furthermore, you wouldn’t witness any noticeable lags or FPS drops, even on enabling the high-resolution textures. Being open-source in nature, there is active development support that fixes all the bugs in no time whatsoever. 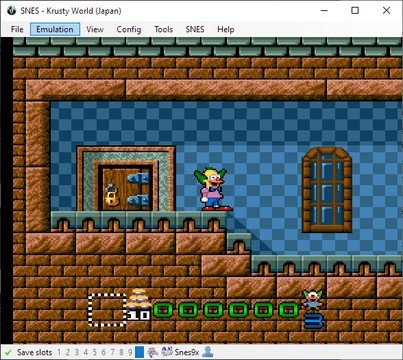 The list for this emulator’s supported games goes on and on. NES, SNES, Game Boy, Game Boy Color, Sega Genesis, Sega Saturn, PlayStation, and Atari 2600 are just some of the supported consoles that it could proudly brag about. But there is something else that gives it a cutting edge over others.

It has a rather controversial Tool-Assisted Speedruns (TAS) that gives you the option to complete any game in the shortest possible time. While many call it along the lines of giving an unfair advantage to the player, we would like to rest this decision to our readers. Anyways, it is still a pretty handy N64 emulator for your  Windows PC. 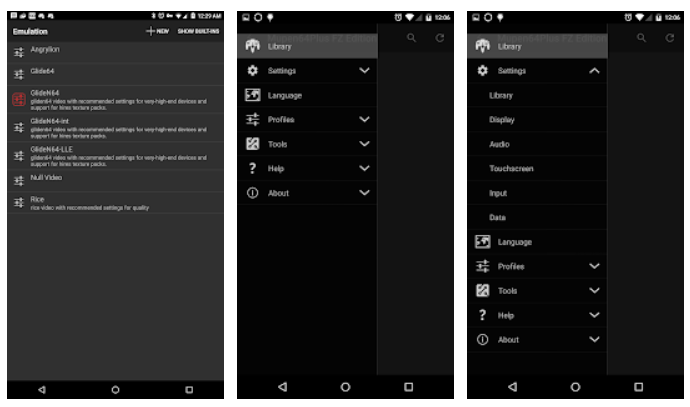 Belonging to the same Mupen64 family, this one is specially optimized for Android devices. One major USP of this emulator is the ability to add plugins that gives a big boost to this application, not only in terms of processing speed but also improves the graphics and visuals of the game being played.

However, all the necessary plugins including the GLideN64 are already included by default. The only complaint that some users have is that it is somewhat a tough job to set it up the first time. Taking note of the same, it has added a step by step setup tutorial for the users who have just about set their feet in the emulator domain. 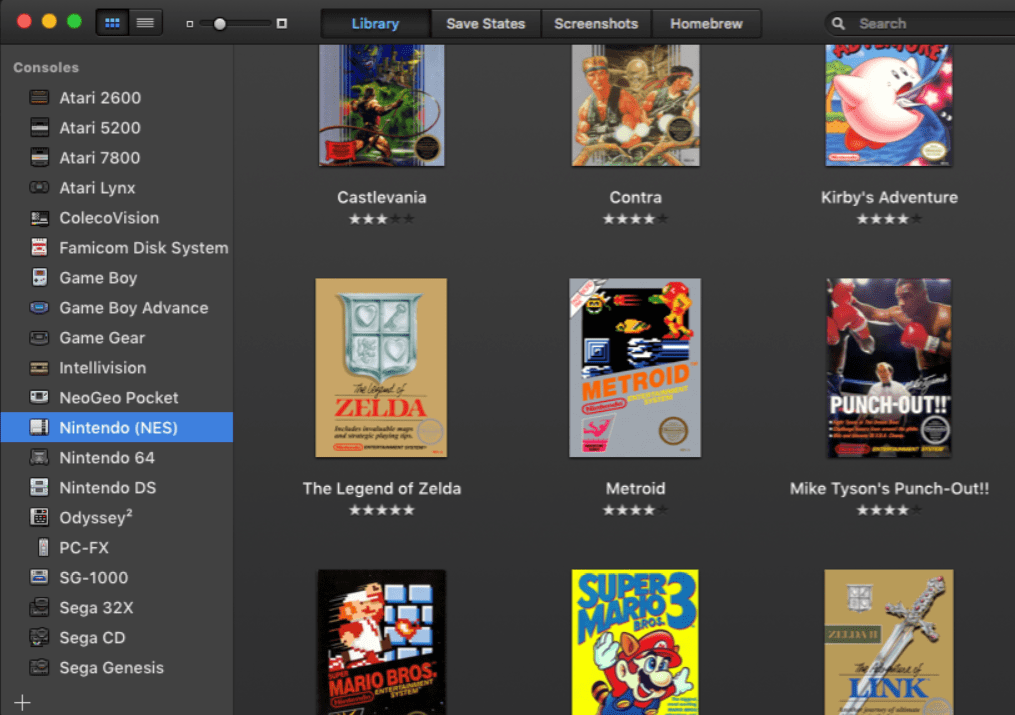 Not only the Nintendo 64, but this emulator is also capable enough to support  Atari 7800, Game Boy Advance, Sega Genesis, NES games as well. Talking about the Nintendo 64, it supports near-about all the N64 games with the automatic organization of all your games in a neat library.

Furthermore, it also has among the cleanest and easy to use interfaces. Loading the games to the emulator is also a cakewalk. It will automatically search your PC for all the games that will give you the option to load one of your choices. If you are looking for an N64 that just about does its job, then look no further than this one.

Another pretty decent Nt64 EMulator, it just about does its job without much fuss. It also gives you, the user, the opportunity to tweak and place the control buttons anywhere as per your comfort. Likewise, the ability to save and load the game at any point in time definitely manages to score quite well in the ease of usage factor.

It supports multi-format ROMS, including the .rom, .n64, .zip extensions. One or two hiccups in the form of occasional lags might be experienced by some of the users, but that isn’t something that might conflict with your gameplay experience. 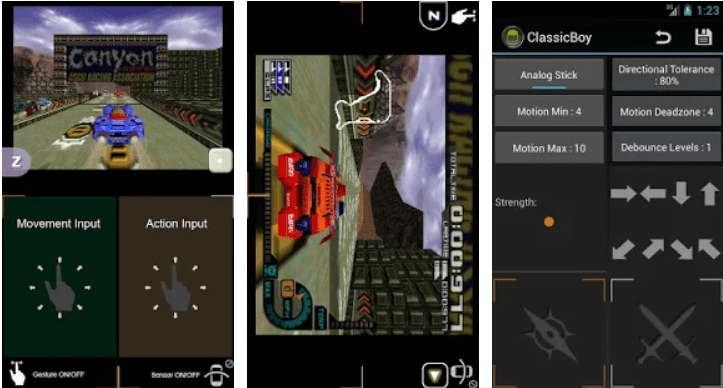 This emulator beholds quite a lot of customization opportunities. Just to give you an idea of the same, Classic Boy gives you the option to edit the graphics button control. Well, we aren’t only talking about its remapping and the placing structure. The style, scale animation, and even the transparency all could well and truly be handled by it.

Apart from that, there is also external joystick support. This becomes an even crucial factor considering the multi-player support for up to 4 players. Furthermore, you could also load PS3, XBOX360, and MOGA profiles as well. While there’s also an option to spend some bucks to get additional support, most of your emulator needs should effectively be met by the free version itself.

With the ability to customize the on-screen button layout and user interface, and the support for external controllers, this comes out to be a pretty handy emulator. It also has a clean and simple UI with support for over 20 languages. The Xperia Play support is something that you could add to its resume as well. Talking about ROM support, zip, n64, z64, v64 are all dealt with effectively.

While most games work without any issues as such, some might require you to download additional plugins as well. So keep that in mind before trying out this emulator On that note, for older devices, the publisher has recommended going for the GlideN64-GLES-2.0 or Rice-Fast emulator profiles. 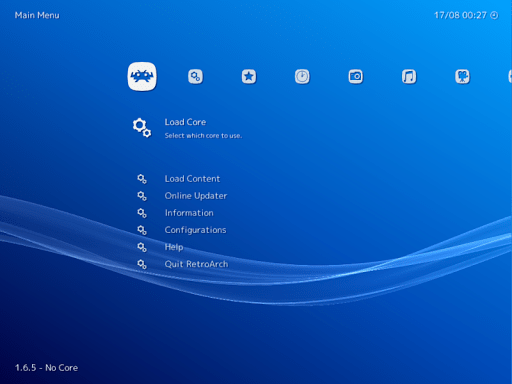 Rather than qualifying for an emulator, it is more along the lines of an application providing the GUI for other emulators. If you are running quite a few emulators at one go, then you should definitely check this one. With the support for Windows, macOS, and Linux, some handy features include the ability to record your gameplay or even live stream it on Twitch, something not many emulators could boast of.

Apart from that, you could also remap the controls as per your need, execute cheats codes and save your game state at any point in time. Since it uses the “paraLLEl” core, it manages all the high-resolution visual aspects of the game quite effectively. The only downside is the fact that since it supports quite a lot of emulators, setting it up for the N64 might prove to be a challenging task for the first-time user. 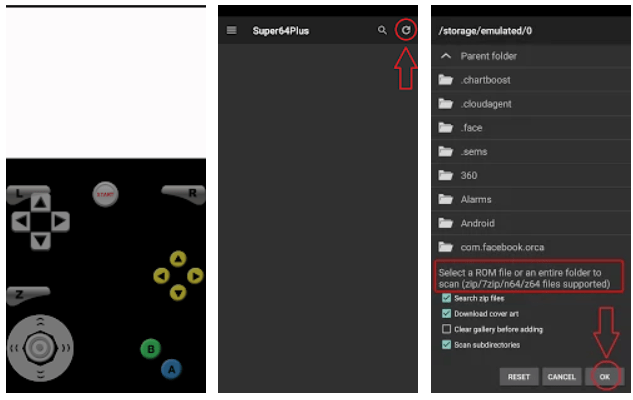 Coming with a plentitude of tweaks, this emulator has something for everyone, with quite a lot of automation features, thereby minimizing the manual effort. For example, the Auto Screen orientation will adopt the most suitable orientation for the game that you have loaded. Then there is also an autosave and state, which as the name suggests, automatically saves your progress at a regular interval of time. Moreover, you could also resize, edit,  modify or rename all the control buttons on your screen.

All the common files format including the .n64, .z64, .v64, .zip, .7zip are supported by this plugin. The developer has also mentioned quite a few optimization settings that you could try out. For example, in the case of lags, you could try changing the Rendered resolution and for the GUI glitches, you might consider changing the video plugin from the Profiles section. This emulator supports all devices running Android 5.0 Lollipop or above versions, but the best results could be obtained on devices with Android 9.0 onwards.

Lemuroid is not only an N64 emulator but also supports systems like PSP, GBA, GBC, PSX, NES, and SNES. So it is an all-in-one emulator that supports over 15 systems. It is an open-source emulator that is very simple but efficient. It is based on Libretro. It can work on many devices, like smartphones and TVs.

It has a clean interface and features like optimized touch controls, display simulation, touch control customization, cloud save-sync, and gamepad support. It also allows users to automatically restore and save game states and has support for zipped ROMs and scanning and indexing of ROMs too. And the cherry on top is that Lemuroid has no ads! 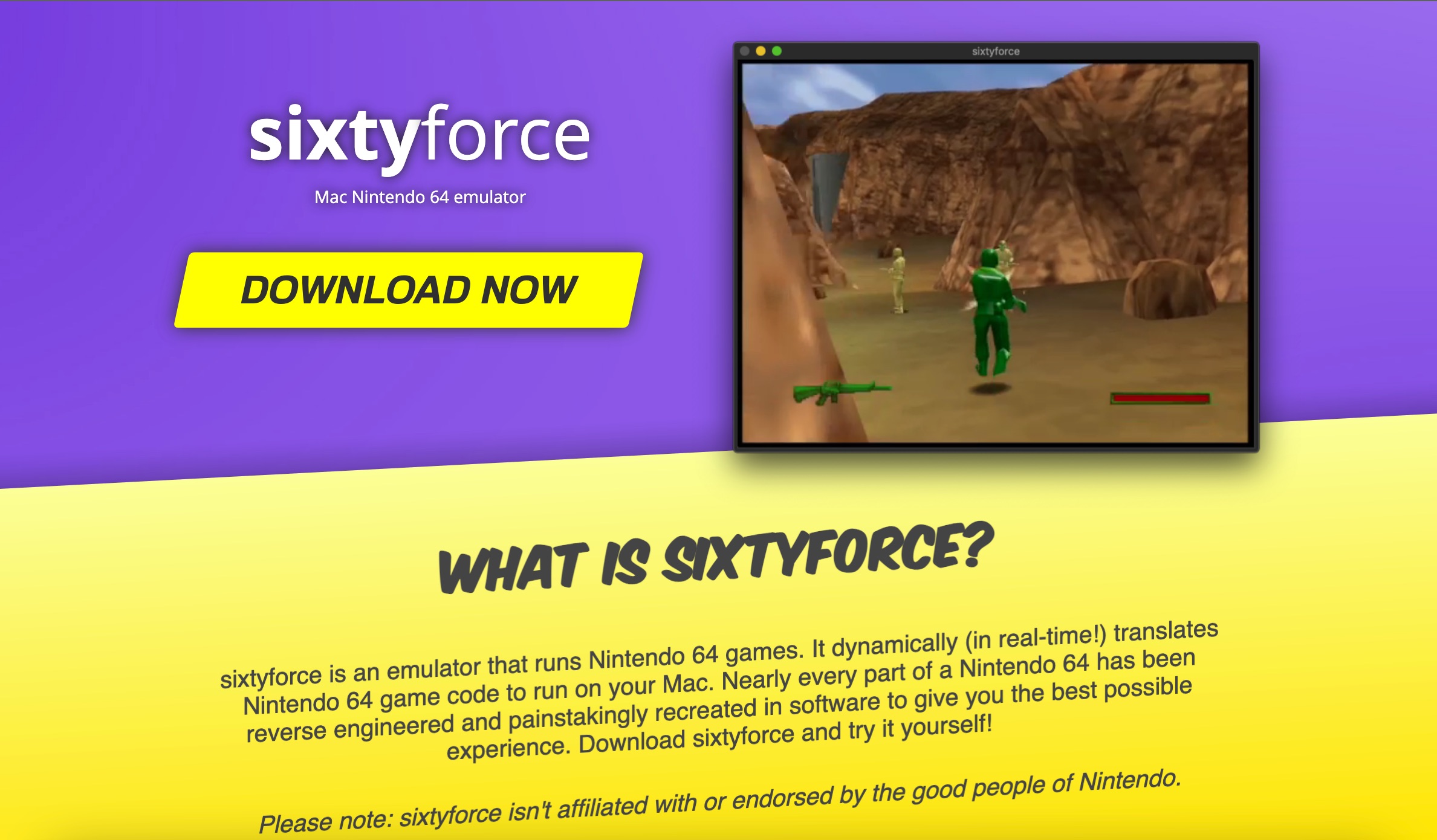 Sixtyforce is an emulator exclusively for Mac. This free emulator runs Nintendo 64 games on Mac seamlessly. The USP of this emulator is that it translates the code of the game in real-time, which ensures the smooth running of the game. It aims to give users the best gaming experience. Sixtyforce has a cool UI and runs pretty fast. Users can hop over to its website for help and FAQs if they face any issues. On the whole, Sixtyforce is an amazing N64 emulator for Mac.

So with this, we conclude the list of 10 best N64 emulators for PC and Android. As you might have also realized, each one of them comes with its own set of perks and caveats, however, none of them has any ROMs preloaded by default. You will have to download or buy them legally from the concerned website. Rounding off, do let us know in the comments which emulator you ultimately settled for.

If you've any thoughts on 10 Best Free N64 Emulators for Mobile and PC, then feel free to drop in below comment box. Also, please subscribe to our DigitBin YouTube channel for videos tutorials. Cheers!