Skip to content
Comparing Apple Safari and Google Chrome Browser on your iPhone Mobile Based on Features, UI, Security, and More with Safari Vs. Chrome. 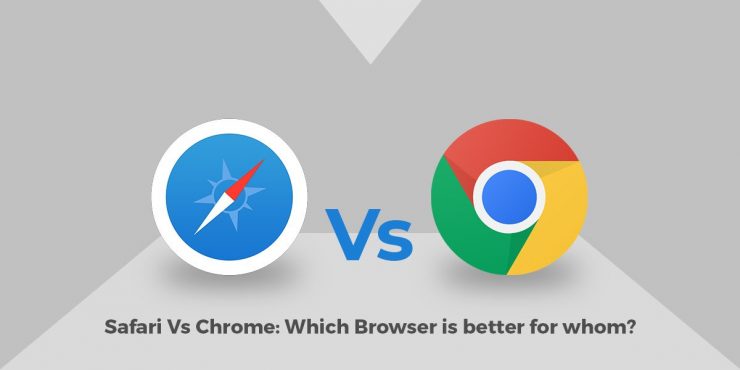 Browser is one of the most important utility tools that we use in our smartphone on an everyday basis and choosing a good, secure, and efficient browser is also important. In terms of usage, Apple Safari and Google Chrome are two of the most used browsers.

In this article, we will discuss Safari and Chrome’s important elements like UI, Performance, Security, etc which will prove to be a decisive point while choosing the browser. We’ve specifically focused on what separates Safari and Chrome from each other.

Safari is Apple’s native browser, built, developed, and maintained by Apple itself. Safari is the default browser for all Apple products either it is iPhone, iPad, or Mac systems. There are many pros and cons to this browser. We will talk about this in the next section of the article.

Chrome is one of the most popular browsers used widely, developed, and maintained by Google under their Chromium project. Chrome has a ton of features that can be useful for every kind of user, either a normal user, extensive user, or students. The Chrome for iOS also works on Apple’s WebKit engine.

Safari Vs Chrome for iPhone

The interface is the first thing most of the users are concerned about, a good and attractive interface attracts more users. Moreover, in an interface, the navigation and tab management works as a vital element.

Both Safari and Chrome have similar interfaces, in the home page, there is a search bar at the top, favorites, then frequently visited websites, and then finally at the bottom, the navigation bar.

Safari’s tab manager looks like a stack of folders, which can be used to scroll and open any recently visited tab easily whereas Chrome’s tab manager is a page with blocks of tabs.

Speaking of features, here again, both the browsers have similar features like Bookmarks in Safari & Reading List In Chrome. However, Google also implemented a few more services Google Translate, Google Voice that makes a better option in terms of features.

Now, in the performance department, both Safari and Chrome uses the WebKit browser engine to load the webpage. Moreover, Apple uses a unique web-rendering engine on Safari that makes it a better option.

In this department, we will be discussing the UI, features, and performance of both browsers. User-Interface of the browsers have a similar interface like the home screen, tab management, so we can’t distinguish them, but speaking of features and performance, both the browsers have similar features but performance-wise Safari took a long step with their unique web-rendering engine, so Safari is better in terms of ease of use.

If you’re using the browsers as a working system, then security is a significant element. Also, as we all know, Apple has already been concerned about the user’s security and privacy. Although both browsers collect users’ data, Mountain View-based Google is known for its hogging nature. So, in terms of security, Apple’s Safari is better, and both performance than Google’s Chrome browser.

Ads are the most frustrating thing while using a web browser. As we know, Google’s maximum revenue is dependent on the advertisement, so Google is a bit lenient on the adblocking department, but Apple is dependent on hardware-based products like smartphones, laptops, etc, therefore Apple is very strict on blocking ads and trackers.

You get a number of content blocking extensions for your Safari Browser which will block Ads and trackers to protect your privacy. Chrome do not support any such feature.

Here was the in-depth comparison between the two of the most used browsers in the world. We have covered the comparison from every perspective like UI, Performance, Security, Password Management, etc. Although, Google Chrome is also great in a few perspectives if we are using a browser in an iPhone then using their own-developed browser will give you more reliability and efficiency.

If you've any thoughts on Safari Vs Chrome for iPhone , then feel free to drop in below comment box. Also, please subscribe to our DigitBin YouTube channel for videos tutorials. Cheers!