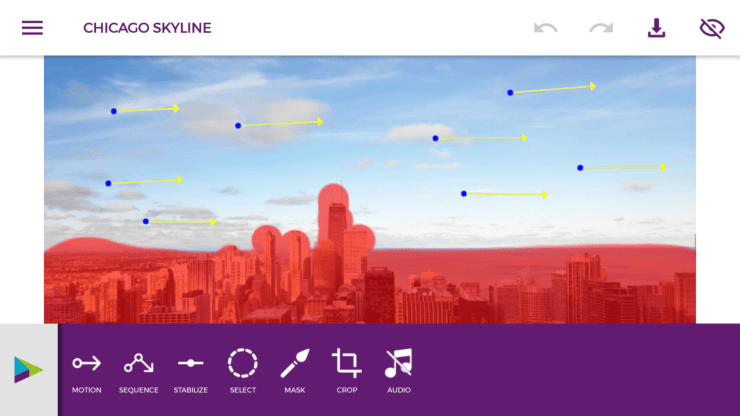 Recently I saw few pictures on Instagram and even a few movie teasers on YouTube wherein the picture will be static however the motion is added to make it attractive and dynamic. That’s where I get to know that it’s called the Cinemagraph effect. It’s basically a mashup of moving cinema within a photograph, and it’s end results are amazing.

I was curious to learn how to do this, whether it needs a machine heavy software like Adobe Creative suite’s Photoshop or After Effect and anything on similar lines. And Yes – a movie production house generally use this bulky software to have the best output result, but what about the beginners or learners?

I did some research and after a few trial tests run in various available apps in Google play store, found — Zeotropic.

It’s a simple but great app that allows adding motions to a picture or photo in motion, and export amazing cinemagraph effect video and GIF out of images. Though the Zeotropic app doesn’t have a rich feature like other apps, however, fits the bill to perform what it’s designed to do.

Zeotropic has two apps in Android Play Store – a free version and another is paid or pro. The pro version costs 130 INR which is nearly around US$2 which again fits in our pockets as well.

I made the pro purchase and really loving the app and export quality, though there is some room for developments and bug fixes. But ultimately it’s better than other similar apps I’ve tested.

As I said, you can search for the zeotropic app in google play store and download the free version before upgrading to pro so see if it fits your needs.

How to create Cinemagraph on Zeotropic?

Basically, you need to select a picture where it has a scope of giving motion. Some simple ideas would be to select pictures with a cloudy sky, waterfall, fire flames, fireworks, etc. It will be easy to work with and add motions.

Here is how my final detail for Motion points and Masking looked for Chicago Sky.

I’ve created a video tutorial and published it on my YouTube channel. Below is the embedded video to watch without leaving the site. I hope you’ll have some basic ideas on how to get started with adding moving effects in pictures.

Is Zeotropic worth upgrading the pro version, any final thoughts?

As I said, did some trail hands-on test on a few similar apps that had almost the same features. But, they were bulky with a lot of extra features that are less useful and tagged with hefty pricing or monthly subscription.

One of the apps even has its in-built social networking system like Instagram to share the Cinemagraph photos and it was good but not worthy to pay a monthly subscription.

After using a full day, I found Zeotropic to be far better. It’s still a little buggy and needs improvement in UI/UX part, especially the Options and Sidebar labels but overall I like it. I’d really love it if they also add an option to enable the dark mode theme since the app skin is completely light and white.

And by the way, it also carries the “Editors Choices” label making it popular and attractive. Now you can be an expert in adding a photo in motion and become a Cinemagraph Pro on fingertips.

If you've any thoughts on Amazing Cinemagraph Effect: Learn how to add motion to pictures using Zeotropic app?, then feel free to drop in below comment box. Also, please subscribe to our DigitBin YouTube channel for videos tutorials. Cheers!