Skip to content
Looking to Unsend the Messages Sent on iPhone or Edit it After Sending. Here is the Simple Guide to Edit or Unsend Message on iPhone. 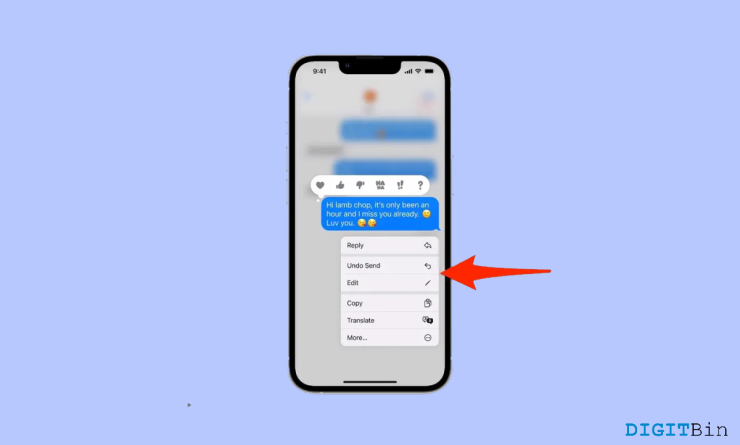 “Sorry! I didn’t mean that” have you ever said this because you mistyped something? If you have said this a few times, then I bet you would love this feature introduced in iOS 16. At WWDC 2022, Apple introduced a fantastic feature that will save you from embarrassment and regret. In iOS 16, you can unsend or edit already sent messages.

This feature is available on iOS 16, and beta users already love it. The iOS 16 is set to release it to the public in a few months. You can sign up for the Apple beta software program if you want to use this feature before it’s officially released.

In this article, we will discuss how to edit or unsend a message on iPhone. We will also discuss how to sign up for Apple Beta Software Program, as many people will want to try this feature before its officially released (Probably September 2022 or October 2022). So without any further ado, let us get started.

How to Edit or Unsend a iMessage on iPhone?

We will cover both features in different paragraphs so that you can simply read about the feature you want. If you want to know about both features, read the complete article to understand both edit and unsend features clearly.

Steps to Unsend a Message on iPhone

First, let’s talk about how to unsend a message on iPhone, which is pretty straightforward. After you send a message:

You can only use the undo send option up to 14:59 minutes after you have sent the message. After that, the option won’t appear in the menu. You can also recover the deleted message for up to 30 days. After that, it’s gone forever.

Note: Remember, if the other person reads the message from notifications, then even undo button can’t save you from embaressment.

Steps to Edit a Sent Message on iPhone

Now, let us talk about how to edit already sent messages on iPhone, which is a lifesaver for many people out there. You can easily edit a sent message on your iPhone by following the steps below:

After you have edited and re-sent the message, there will be a notification under the text bubble saying that the text is edited after it’s sent. Don’t worry, as the recipient won’t know what the text was before you edited it.

Should the recipient have iOS 16

Absolutely yes, the recipient should also have iOS 16; Otherwise, the edit or unsend features won’t work. Let’s talk about this clearly:

Let’s say you have sent a message in a group chat where people are using iOS 15, and a few Android users are also present. You edited the message after sending it in the group chat. Now, the people running iOS 15 or older versions and Android users won’t get the edited message.

The message is only edited on your end, and the other people in the group chat will still see the old message. This will happen if you are running the iOS 16 first beta version.

Suppose you are running the iOS 16 beta second version. In that case, after you edit the message, the message is completely sent as a new message with the prefix “Edited to,” and the original message is also still present in the chat.

This is enough to embarrass you after you misspelled a word or the autocorrect changed it to something else. The unsend option will also not work. So, please be careful before sending a message to your non-iOS 16 or Android friends.

How to Sign up for the iOS 16 Apple Beta Software program?

The Apple beta software program lets you test the upcoming iOS versions before officially being released to the public. This iOS version will have glitches and bugs which might interrupt your experience. You can report these bugs to Apple and get them fixed in the next versions. This program is completely free and available to everyone.

To signup for Apple beta software program, follow the steps below:

This is how you can sign up for Apple Beta Software Program and install iOS 16 to enjoy the new features. Make sure your device is compatible before you sign up for this program.

The edit and unsend are some excellent features Apple has introduced with iOS 16. If you are waiting for the official release, keep your eyes on the updates section in your iPhone settings. If you have any queries about the article, please drop them down and also let us know if you liked these features or not.

If you've any thoughts on How to Edit or Unsend a iMessage on iPhone?, then feel free to drop in below comment box. Also, please subscribe to our DigitBin YouTube channel for videos tutorials. Cheers!