Skip to content
Here are some of the best Android Apps to Root your Android mobile with APK, windows or Mac software application. 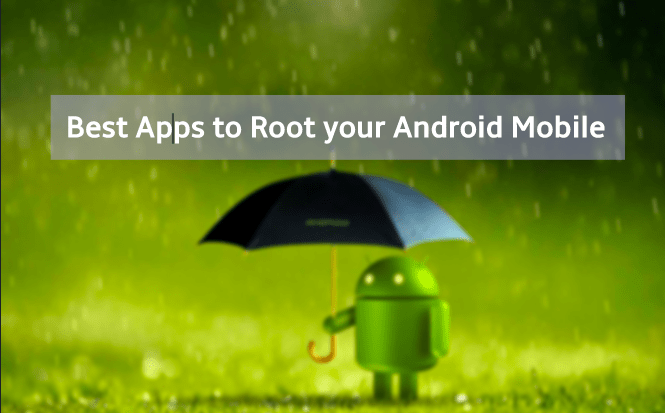 Android is a powerful ecosystem controlling more than 90 per cent of the smartphone industry. The success of Android can be credited to its being an open source operating system. These allow the users and developers to tweak around and test some features on the Android phone itself. Rooting is one such feature which lets the users gain full access to the Android mobile.

There was a time when performing root was a complicated business but today the process has smoothened a lot. There are a number of Apps which help in injecting the binary onto the Android phone easily and without any codes and scripts. With a rooted device, you get full access to the mobiles subsystems giving you the power to perform operations like blocking Ads, hibernating Apps, removing bloatware, accessing system files etc.

Rooting is the process of allowing users on devices running the Android operating system to attain privileged control over various Android’s subsystems which cannot be gained with a stock OS system.

Root is just a user with elevated permissions, who can do anything to any file or folder in the system. A rooted phone can be used to modify the system files, install any other party firmware, block Ads or access some Apps which cannot run without the root permissions.

Rooting Can be Done Easily if certain important stuff is taken take of. Below are important preparation needed before you proceed.

You may need to enable USB debugging if you wish to connect the computer and Android via USB cable.

You can now directly install the App without any issues.

Best Apps to Root Android With or Without PC

Rooting used to be a tricky back then but with the development of more prominent and reliable tools, it has become less complicated and at the same time with increased safety. Developers are always on a battle mode to release tools to root the latest versions of Android.

Here are the best Rooting Apps for Android without PC using APK file or With Computer PC. 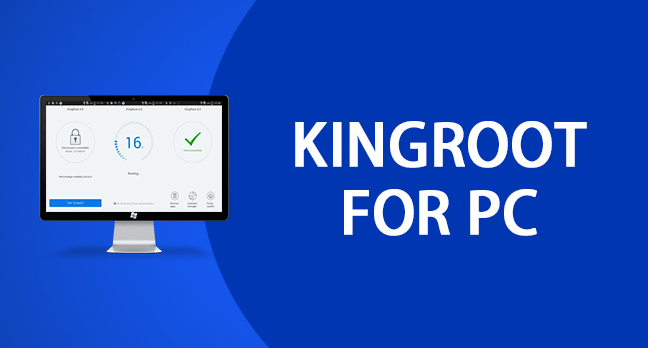 It is the most popular rooting App for Android. The KingoRoot supports a large base of the Android phones, Samsung, Google, HTC, Sony, ZTE, Lenovo, Micromax, Oppo etc. It is one of the most trusted Android rooting application and has a high success rate.

Even if the rooting fails the probability of risking the phone is very low as the application only executes some codes which modify the root files.

You do not need any coding or scripts to run the application. All you need is to connect the Android phone to the PC using the USB Cable. And then it is a one-click process.

How to Use KingoRoot Application?

Framaroot is a one-click root App for Android which can be directly installed on the phone without any computer software. So, you will be safe from rooting complications like black screen, dead screen or soft brick. The App exploits loophole if any in the software to inject the files onto the device. Framaroot explores the device to be root and provides with the perfect exploit for the process.

How to Root the Device using Framaroot?

Kingoroot APK is the most trusted Android rooting application which does not require any 3rd ecosystem for its functioning. Just download the App on your Android phone and follow the steps on the screen to root the device. The App supports Android Lollipop, Marshmellow and Nougat version on many manufacturers. It is a simple, safe and convenient way to root the phone without any trouble. Kingoroot supports all the major manufacturers running on Android 1.5 to Android 7.1.

The App can exclusively root Samsung, HTC, Google, Sony etc devices. If you face failure with the Kingoroot APK then I recommend to with Kingo Root PC version which has more success rate.

How to use Kingoroot APK? 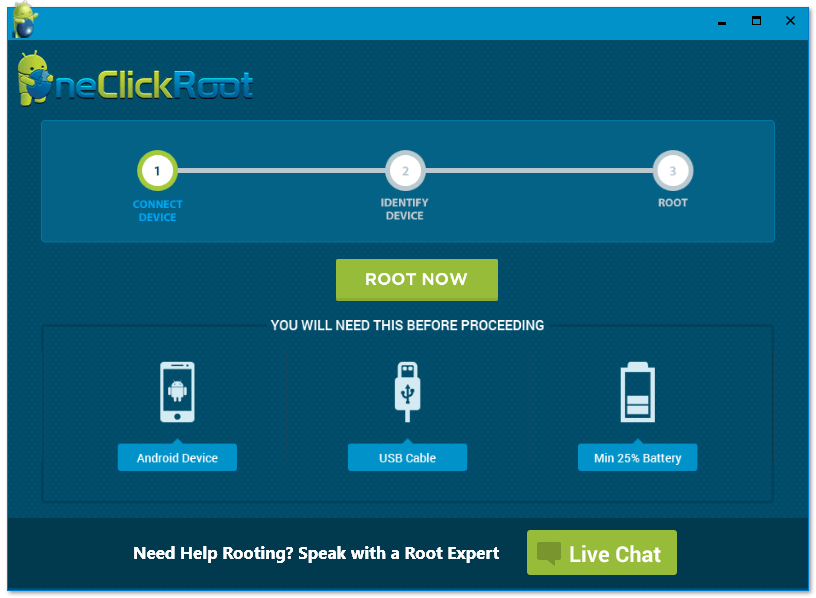 Click Root is another popular application for injecting the exploit into the phone. Rooting an Android phone using Mac is very easy, all you need to do it just download the OneClickRoot Application on your Mac and connect the device with the PC. The success rate of the phone getting access permissions with a PC tool is more than a standalone rooting App. There is also a dedicated chat support on their official site, this will help you troubleshoot any issue

How to Root using OneClick?

SuperSU is the leader in the mobile world for developing files for rooting. The SuperSU is developed by #Chaifire. The SuperSU has the highest success rate, though it is not an App, the process to root the device is very easy and simple. All you need to do is flash a zip file in recovery mode. The SuperSU App on Android holds a rating of 4.3/5 with over 100 million downloads. 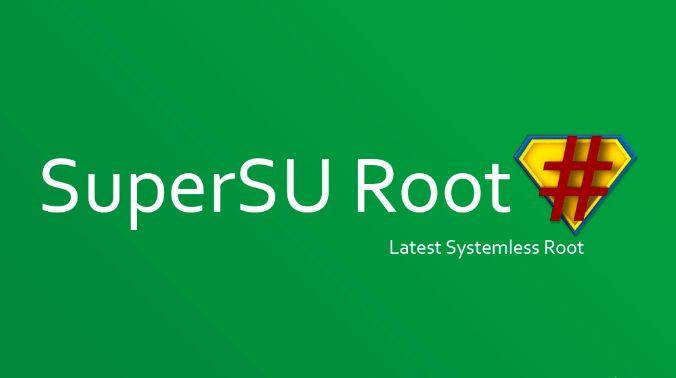 How to Root your Android using SuperSU?

How to Run Cydia? 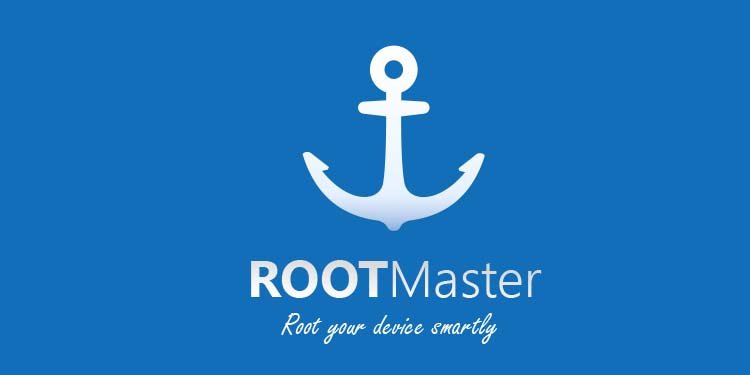 It is is a powerful rooting App which is able to introduce the codes into the Android subsystem to give you all the excess permissions. The App is developed by senior developers at XDA and is lightweight with fully functional capability to break the code on any Android. You do not need any 3rd party hardware device to perform the operation. The App is safe to use as it will stop the process if it cannot impregnate the system.

iRoot is a reliable way to root the Android mobile without bricking it. As it runs with on PC the success rate is very high and risk associated while rooting process is pretty low. The App has updated scripts and codes which makes it very safe and works on most of the ecosystem. The process to root the device is very simple all you need is to connect the device with PC using USB, enable USB Debugging Mode on Android, connect the PC to the net, once done on the screen you will get prompt you to click the root. It is a one-click root process to gain the subsystem access on the Android.

The App is developed by XDA developer to root the Android device easily without any coding complications. It is a one-click process. The APK is capable of rooting Android 4.3 and 4.4 without any issues. The TowelRoot is just another powerful such App which can make your work easy.

Z4 Root App is a simple Root app for android with the ability to inject the exploit temporarily, permanently or remove the codes. The App interface is simple three options to choose from. The App is able to root any device up to Android 4.5+. Z4 App can do your job easily without any issues.

Root Genius is the best tool for root any Android smartphone. Genius supports more than 1000 devices. The App is best to safely. Simply download genius on your PC and run, connect your device to the PC using USB. The latest update Root 3.1.7 is only available with Chinese interface and Root genius apk is also available for direct download on Android smartphones. But the PC version is found to have a high success rate. It is capable of rooting up to Android 4.1

The app is designed for developers and is generally used for performance and testing purpose. This app permits all the apps to access roots once the binary file is installed, thus you do not need to give permission every time. Once the task is done you can uninstall it. Hence, you won’t get any pop-ups asking for permission to access the root, though the App is not a rooting service in itself. But it is a very good App to if you are deep into coding stuff.

SRSRoot can be dubbed as the oldest rooting tool for Android. You can root almost all android phones. It is a 1 click app, and all you need is to only download and install the app, open it and follow the on-screen instruction to complete rooting with SRS rooting method. The software is a top tool for rooting/unrooting Android phone or devices. It can root almost all android devices running from version 2.2  to 4.4. The App is risk-free and can be used on tablets also.

Note & Conclusion: With the Apps above you can root any Android phone without any computer laptop or with Windows or Mac.

If you've any thoughts on Best Apps to Root Android Device With or Without PC, then feel free to drop in below comment box. Also, please subscribe to our DigitBin YouTube channel for videos tutorials. Cheers!