Skip to content
Let's Compare AVIF Vs JPEG Vs PNG and Check Which Image Extension Format is Best for Image Viewing. 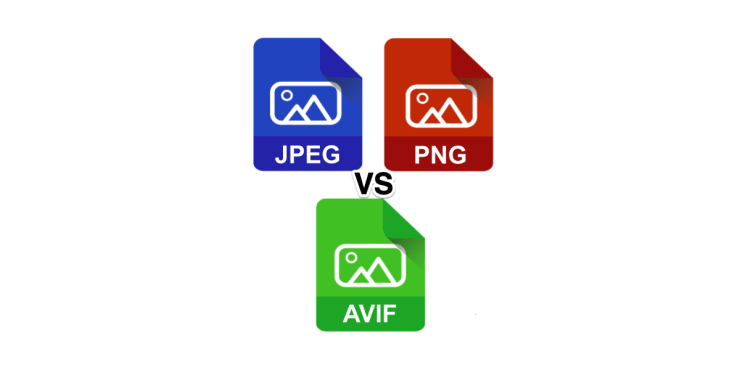 Organizing things in chronological order, we have the GIF, JPEG, and PNG as the three classic web image formats that come with universal support. And for the past few decades, JPEG has been holding a great dominance over the market.

However, with the appearance of new image formats, things seem to be more critically balanced lately. Newer formats such as WebP, HEIC, and AVIF, are more likely to have a better impact on mobile and web browsing players.

In this article, we will see a brief comparison between JPEG and PNG formats. We will also explore the AVIF format and discuss all its positive and negative points over the other two. In the end, we are going to look at an overall summary considering the deserved positions of these three web image formats.

First, we will start by discussing each of these formats one-by-one in detail:

The JPEG format has been consistently ruling over this industry for a long time now. It was basically developed for the advancement in digital photography.

JPEG is given such importance because it offers a far better color resolution along with a 24-bit in-depth pixel quality. This makes each and every single element of the picture to pop out and interact with human vision.

Since the human eye is not capable of recognizing the sensitive details in a picture, JPEG further reduces the RGB images into single luminance and dual chroma channels. This actually helps us discover more distinctions among the chroma sections itself. While on the other hand, our eyes can perform well enough in identifying sensitive elements with high luminance.

Above all, you get a more refined image with every minor detail that, too, with compressed file size. However, the only problem with JPEG is, artworks such as shapes and designs might look very different depending on the pictures.

This often blurs the sharpness of the artifacts in the image while trying to compress the file size.

Any pictures with artifacts in it are recommended to have a PNG format by default. These files do not drop any information and thus provide a very detailed result. PNG files support heavyweight images with a comparatively larger file size than GIF or JPEG.

They are also great in terms of transparency and support enhanced image compression. So, whenever you are working with shapes, designs, or fonts, consider saving it as a PNG file. This will save you some bytes than a GIF and provide you with accurate images.

Now, AVIF is a new term compared to JPEG or PNG. It is another variable resembling the purest efforts in the latest growing video standards. AVIF is a full-featured format that comes with support for HEIF containers. It is known to provide a much better compression efficiency and is encircled by all major web image formats.

It makes use of the AV1 coding mechanisms, which makes it impactful. Besides, one of its major plus points includes the Alliance for Open Media, which has a significant role to play behind its development. AV1 also features a block-based format feature in addition to several other new techniques. This enables a variety of coding options for the encoders.

AVIF is completely an open-source format that comes with an open license, free approach, and fully royalty-free service. Some of the tech giants such as Google, Amazon, Netflix, Adobe, etc. have already started adopting this platform for future generation projects.

Here are some of the basic differences between these three image formats. Additionally, AVIF or AV1 is a video format for the web that has even been accepted and used by platforms like YouTube and Netflix.

It is further considered as a great alternative to the king of formats i.e, JPEG. Moreover, AV1 has been consistently coming up with positive results for every test, which makes it count among the most efficient web image formats.

For now, JPEG and PNG are going to hold their positions for another good amount of time. It is due to their universal acceptance and support. However, AVIF has proved it’s worth and is already in progress for so many platforms. Although the adoption is going to take a while, it is definitely one of the best to keep in practice for the future generation.

According to you, which one is going to stand as the best image format? Also, share your thoughts regarding other formats such as Webp, HEIC, and more.

If you've any thoughts on AVIF Vs JPEG Vs PNG | What is the Future?, then feel free to drop in below comment box. Also, please subscribe to our DigitBin YouTube channel for videos tutorials. Cheers!