Skip to content
Nokia has launched the new Nokia 5.4 with a Qualcomm Snapdragon 662 processor and a 4000 mAh battery. Know more details below. 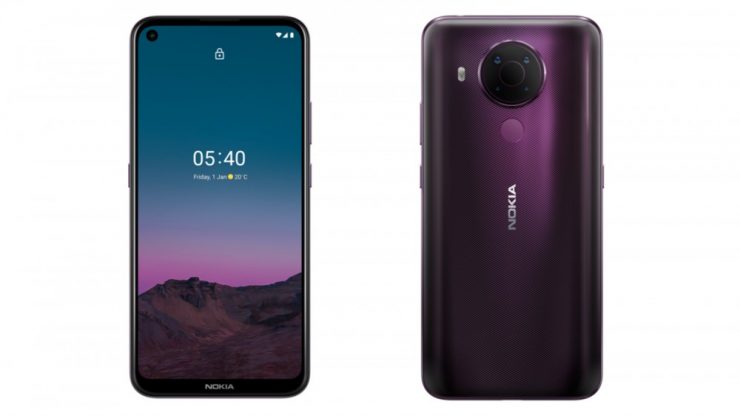 The phone will compete with other phones in the mid-range category. Priced at 189 Euros or approximately Rs. 16,900 the phone runs on Android 10 and is ready for Android 11. The Qualcomm Snapdragon 662 processor is the star of the show that is optimized with AI technology.

The phone is available in two variants, Polar Night and Dusk. It has a 6.39 inch plus punch hole HD display. The resolution offered is 1520 x 720 pixels. Talking about the storage options it will offer three storage variants. It will be available in a 4GB+64GB variant, a 6GB+64GB variant, and a 6GB+128GB variant. The camera has been switched up from the 5.3, which had a 13MP camera. The 5.4 has a 16MP selfie camera. The rear cameras are a 48MP primary camera, along with a 2MP macro lens, a 2MP depth sensor, and a 5MP wide camera.

The new Cinema mode can shoot videos at 60 fps, and other features include wind noise cancellation for videos, OZO spatial audio, and a LED flash module. Nokia’s quad-camera offering will help users capture photos smoothly with no lag. Other than the camera set up, we have the 4000MAH battery, which can last for two days. The Nokia 5.4 does not support fast charging, but the 10W charger provided in the box makes up for the lack of fast charging. Compared to Nokia 5.3, the battery is the same.

Compared to the Nokia 5.3, which has the Snapdragon 665 processor, the Nokia 5.4 has a snapdragon 662 processor. Sensors in the Nokia 5.4 include Accelerometer (G sensor), Gyroscope, and Proximity sensor. The Fingerprint sensor is just below the camera set up. It has a Biometric face unlock feature too. The connectivity options on the Nokia 5.4 are 4G LTE, Bluetooth 4.2, FM Radio, and a 3.5mm headphone jack.

The Nokia 5.4 has been launched at 189 Euros or approximately Rs16,900. But, Nokia has not confirmed whether it will be available at the same price in India.

The phone will be soon available in India. It is expected to make its way into the country in January 2021.

Hence, the Nokia 5.4 is a decent mid-range smartphone that is predicted to come to India in the coming year.

If you've any thoughts on Nokia Announces its End of the Year offering, the New Nokia 5.4, then feel free to drop in below comment box. Also, please subscribe to our DigitBin YouTube channel for videos tutorials. Cheers!