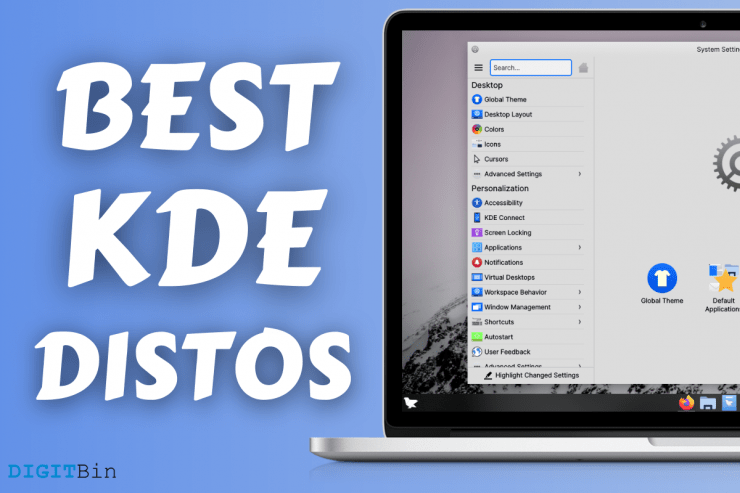 I love KDE Plasma-based Linux operating system, and we have listed the best KDE distros that you can try today. Everyone has reasons for why they want to choose KDE-based Linux distributions, and we have a few reasons on the list.

Make sure to go through the entire list because we are going to include crucial functions and what sort of performance you can expect in a low-end machine. You can test all Linux distributions without installing them on the machine using USB Flash Drive.

Kubuntu is the best KDE distro out there, and we don’t see a reason why it should not be in the #1 position. We have used Kubuntu for a long time and compared it with other KDE Plasma distros. There is a term called “bare bone” and that suits Kubuntu in many ways because it doesn’t have bloatware or additional freeware in the software. The users have an option to choose “minimal installation” that I love a lot because you can escape from unnecessary programs in the system. 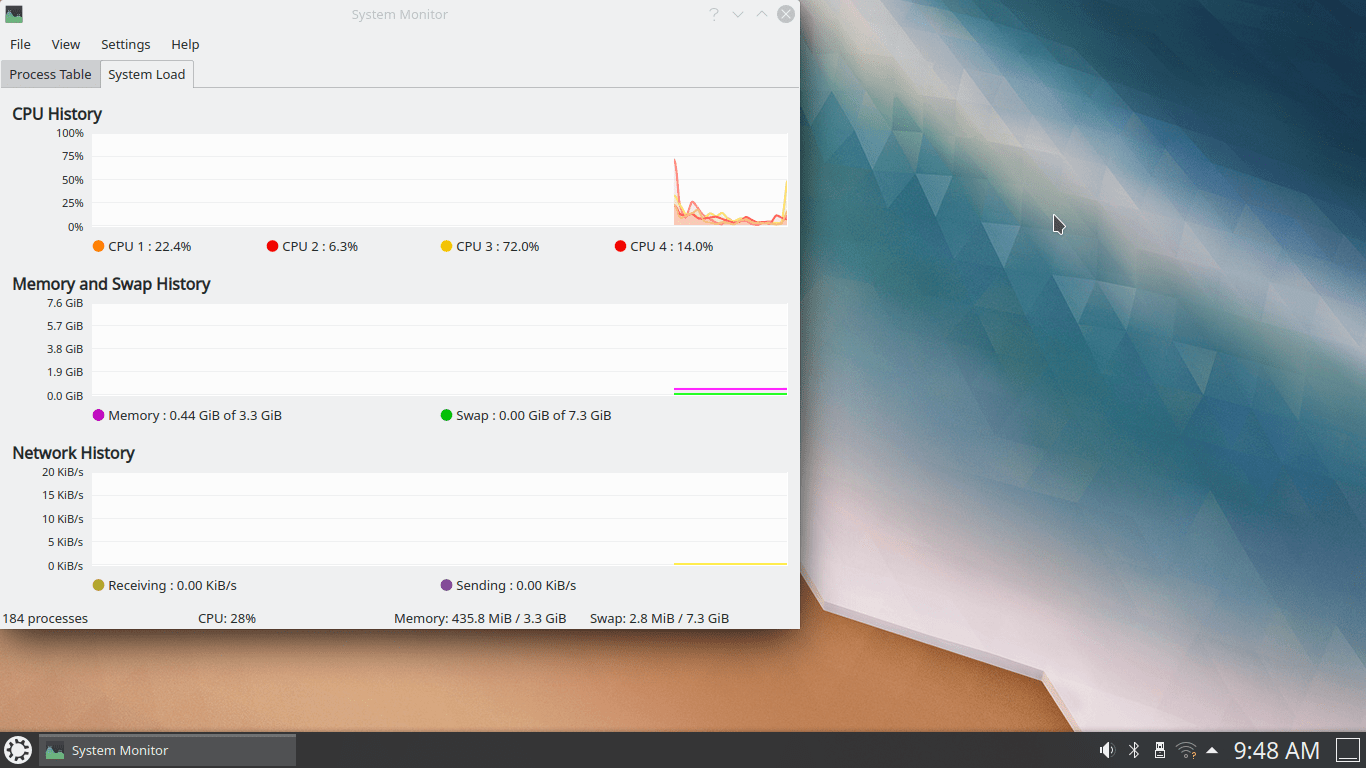 Kubuntu is a combination of KDE, Plasma 5, Linux, Debian, and Ubuntu. The latest LTS (Long Term Support) edition works smoothly on older machines, and you get responsive to feedback from the gestures. You can take minimize & maximize the window for instance, where it doesn’t consume lots of resources. 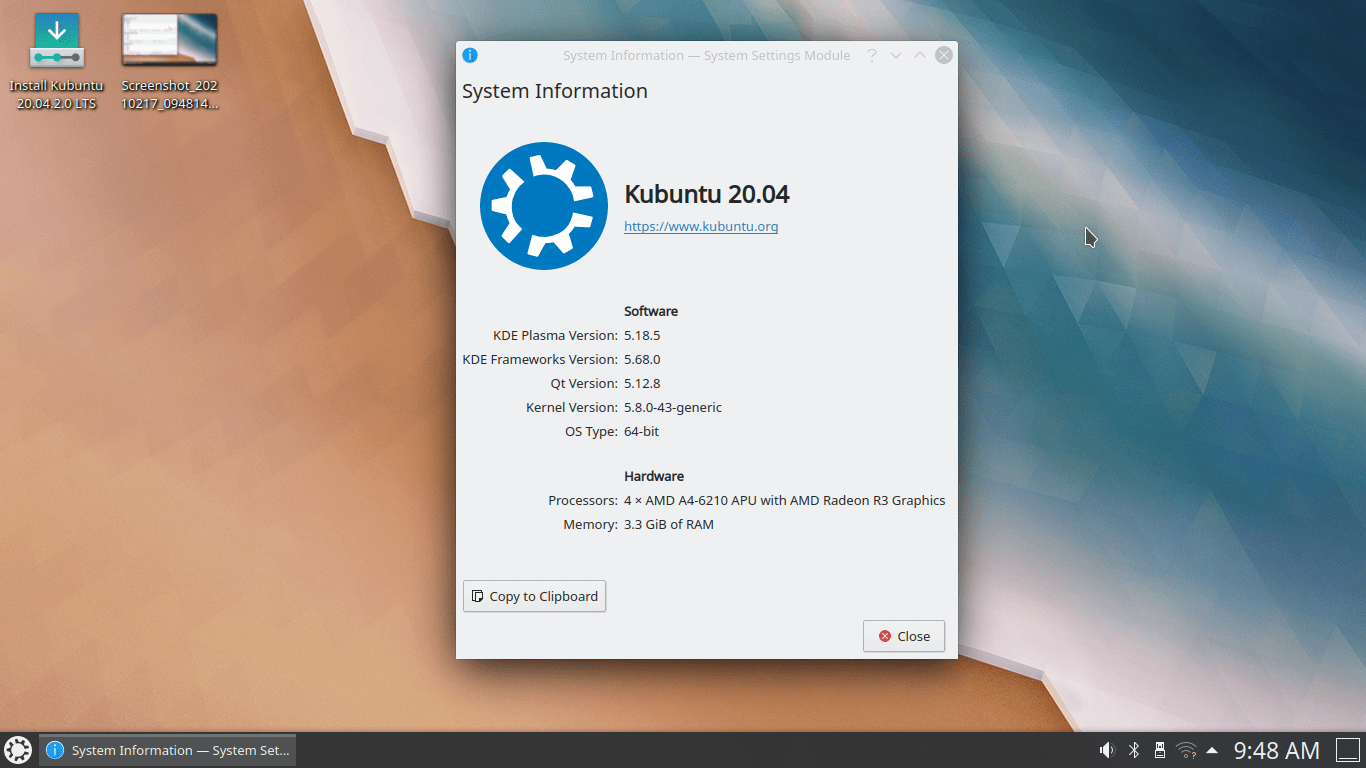 The performance of Kubuntu is on-point on older machines, and you will get the best KDE Plasma 5 has to offer to the users. We have used the distribution for a long time to ensure that it does what it says and the performance was flawlessly on our six years old machine. The RAM consumption reached 2.1GB after running Firefox (3 or 4 windows), File Explorer, Spotify, WPS Office, and note pad.

You can run all basic applications in a Dual-Core CPU, and Kubuntu will work smoothly on older machines rocking the Intel E2180 processor. The developers have to work on the in-house application Store because it lacks a couple of features. However, you can install all open-source programs in Kubuntu from the Flatpak.

We had a good experience with Kubuntu, and it is the first choice that is recommended to the readers.

Feren OS is an upcoming sensation in the KDE Plasma category, and the contribution goes to a combination of beauty & beast aspects. Feren OS is a true eye-candy, where the developer has focused on providing a stable environment along with a stunning visual interface and pleasant experience to the users. You have all the goodness of KDE & Plasma 5 on the table along with a beautiful visual interface. We have been testing Feren OS for a month now, and it brings the most aspects of modern computing & visual demands to the table.

The vision for Feren OS is different from the traditional KDE Plasma versions available in the open-source market.

Windows users get an option to install a distribution that gives them a nostalgic macOS & Windows combination interface, and that’s what we love about Feren OS. The Latte dock is integrated smartly, and it doesn’t even look or feel like a third-party add-on. 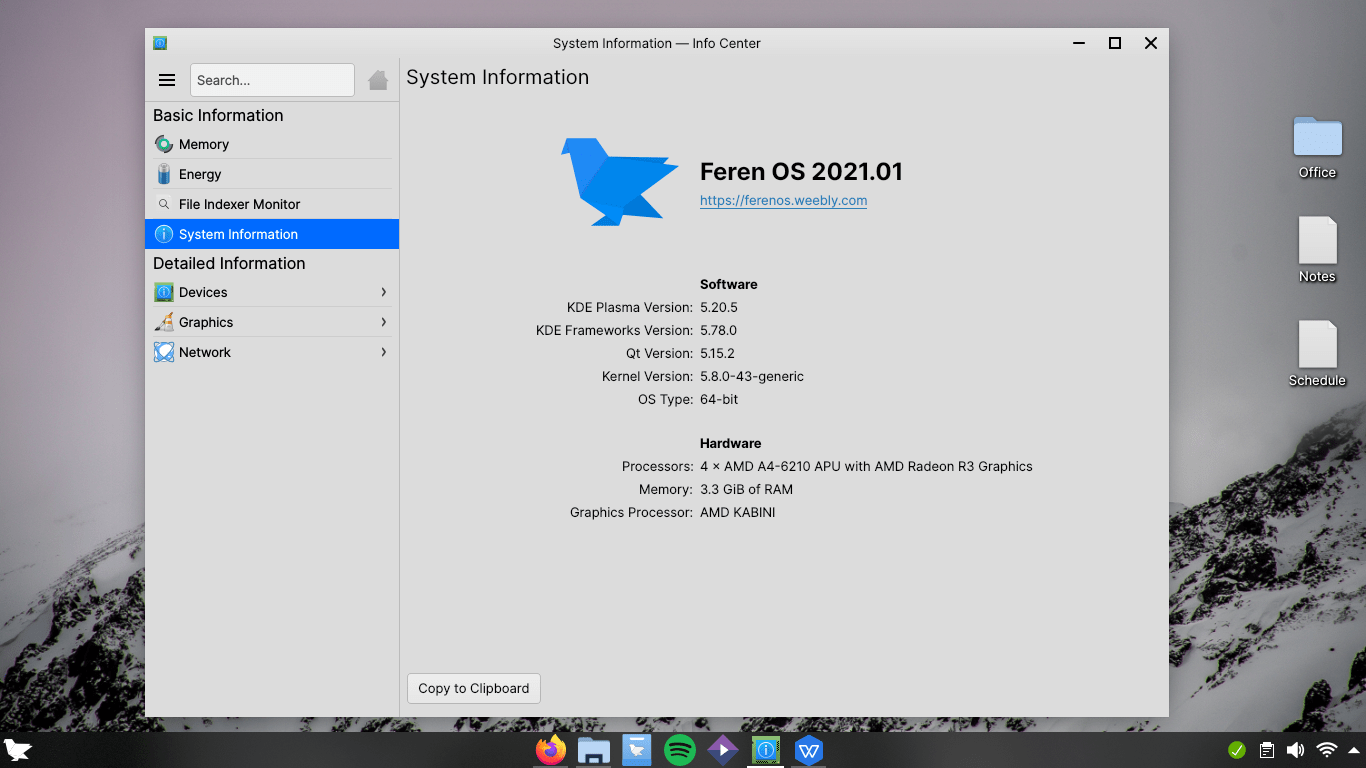 You can uninstall the Valvidi browser from the “Web Browser Manager” and install what you want in one-click. 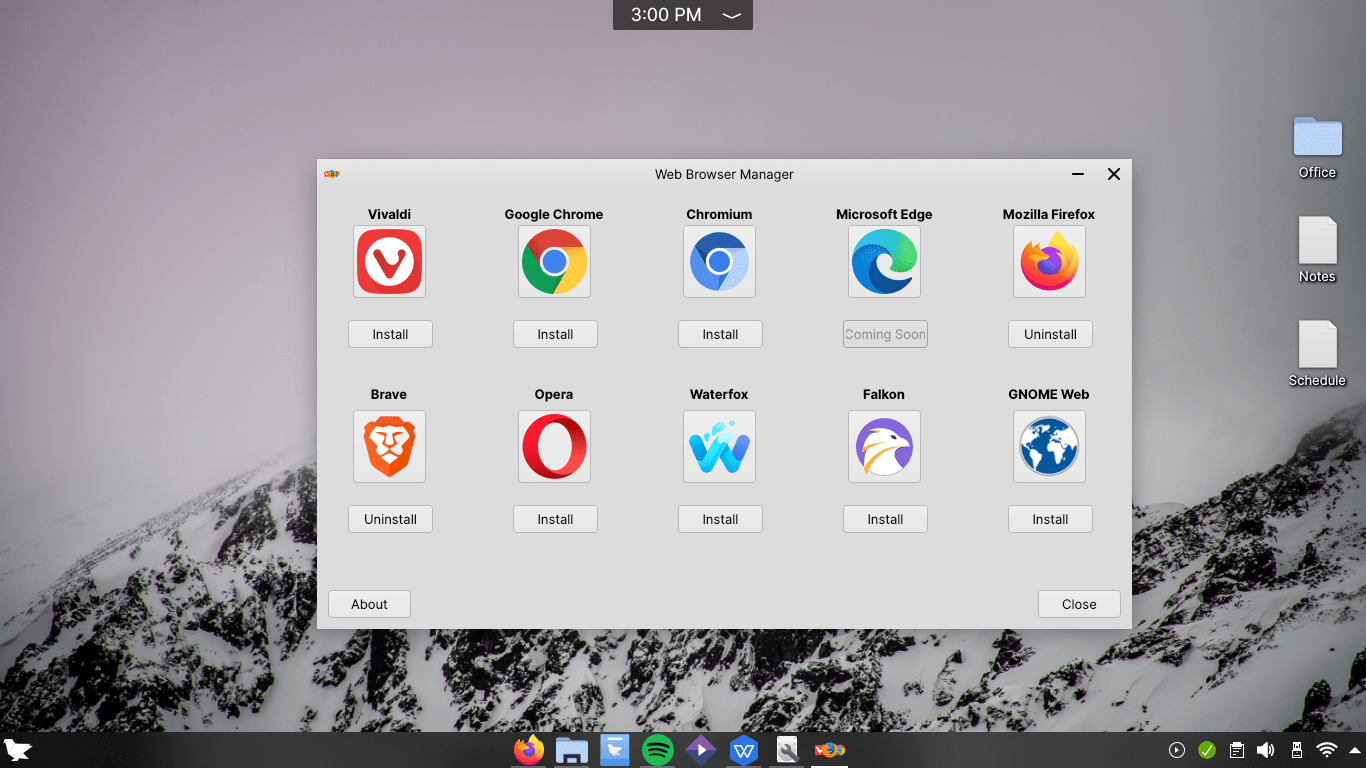 We have to look at the performance aspect as well, and there is a reason why it landed on the second spot. Feren OS does a good job at living up to KDE Plasma’s reputation, where you get an optimal performance like Kubuntu. 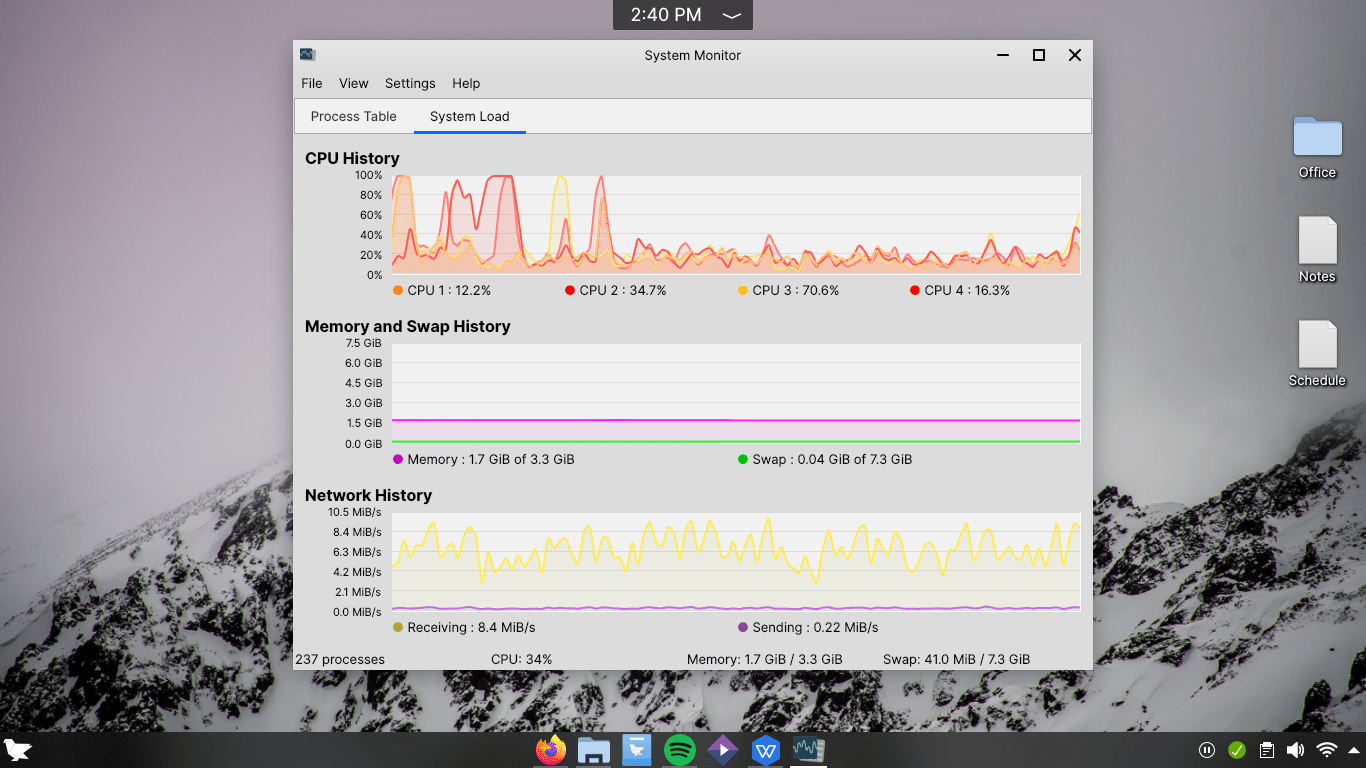 We had one problem with WPS Office 2019 edition, where the document freezes for 20 seconds. The one-time document freeze is the only problem that we have experienced so far.

KDE Neon is another edition of KDE Plasma 5, and many consider that it is a Kubuntu clone, and they are entirely wrong about it. An experienced Kubuntu & KDE Neon user can tell the difference, and all you have to do is to use both distros for a month. 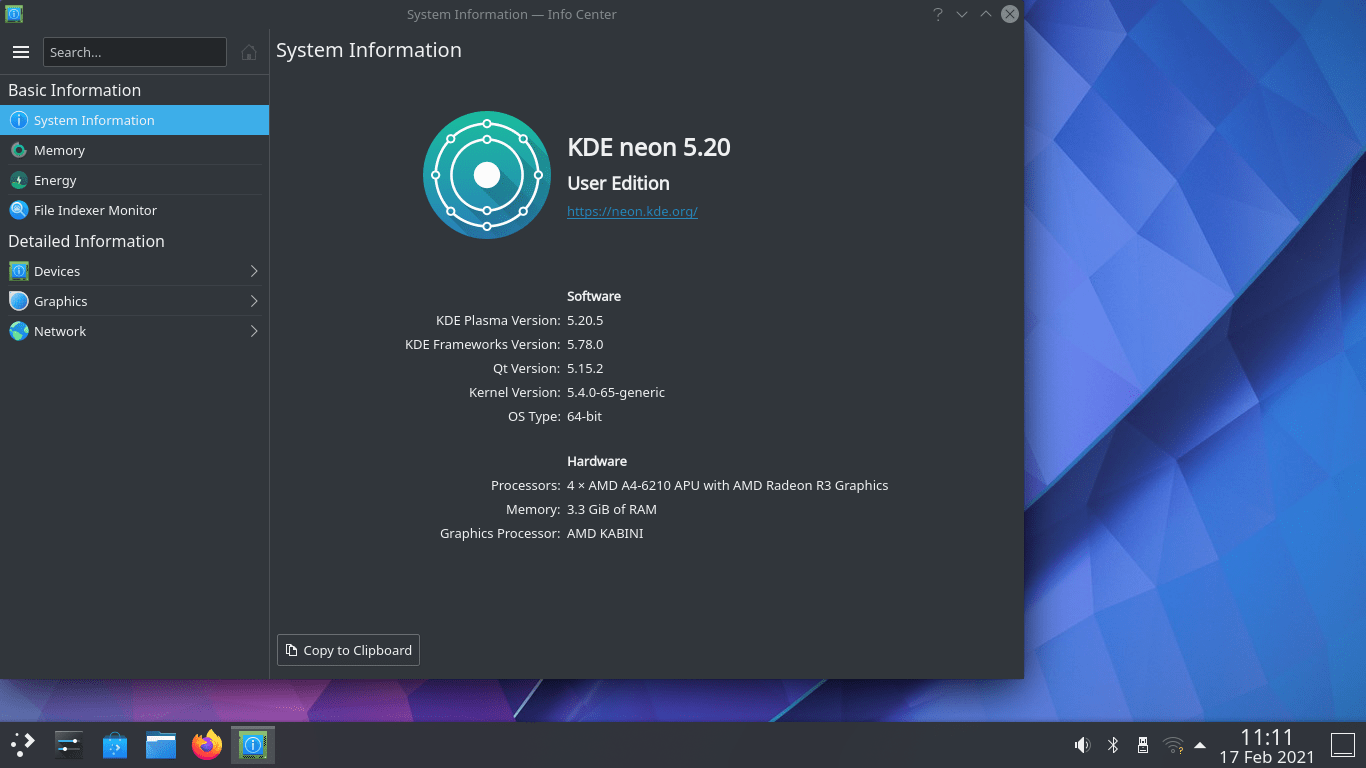 Allow us to explain KDE Neon in two words “Clean Distribution”, and that’s all there is to it. You have a KDE Plasma 5 operating system that gives 100% freedom to the user. The ISO file size is 1.7GB, and that’s enough to tell that this is a lightweight software that does not consume lots of hardware resources.

You can open System Monitor and keep an eye on the hardware resources. You will be baffled by the RAM, CPU, and storage consumption during the idle state. 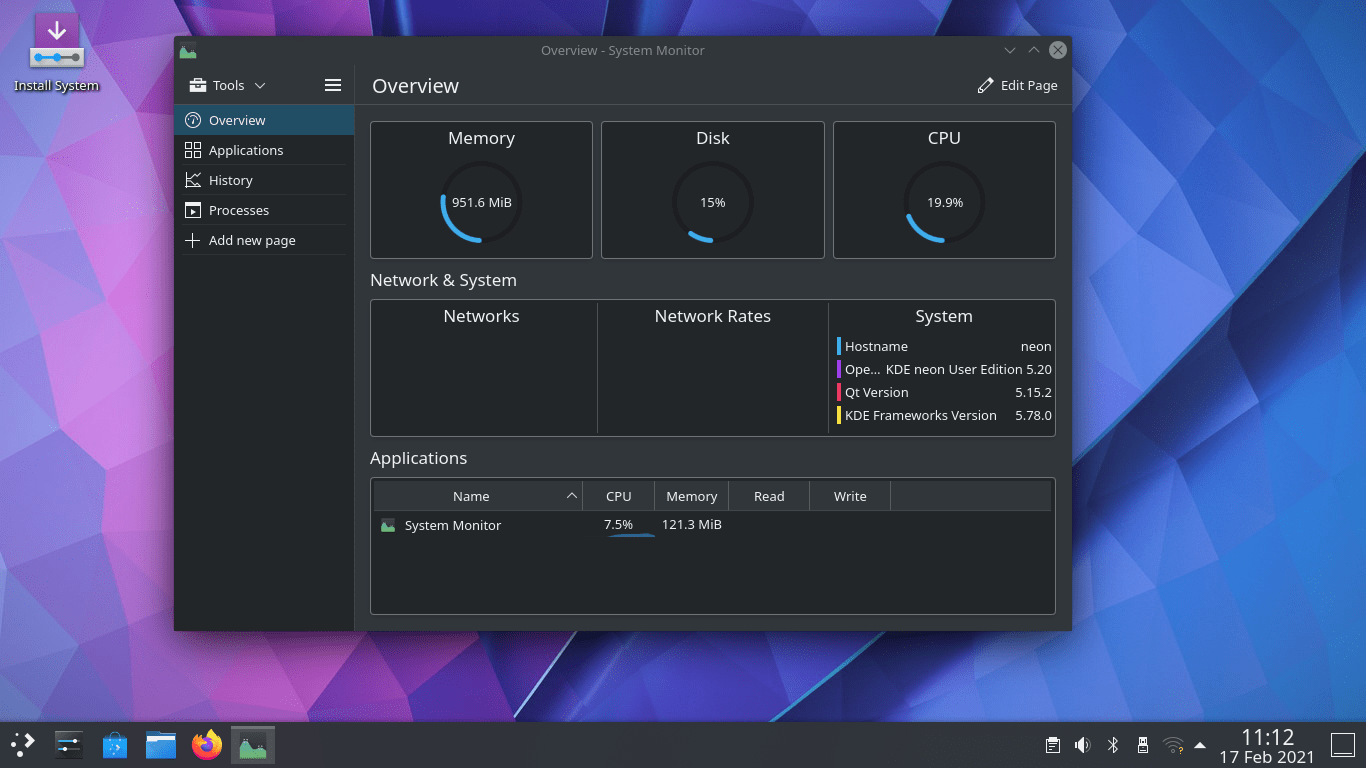 Note: The RAM consumption might seem high in our snapshots because it was in testing mode.

We have to point out that the official developers ask the users to use the “pkcon” command line, while Ubuntu prefers the “apt” command line.

Manjaro Linux is based on Arch Linux, and it is a popular distribution among enthusiastic users and developers. Manjaro is an advanced operating system that is recommended for developers, coders, and programmers. However, Majaro KDE is more of a consumer-oriented Arch Linux desktop operating system. The official Manjaro developers took one step forward to provide what the users want and give them options to choose from it. 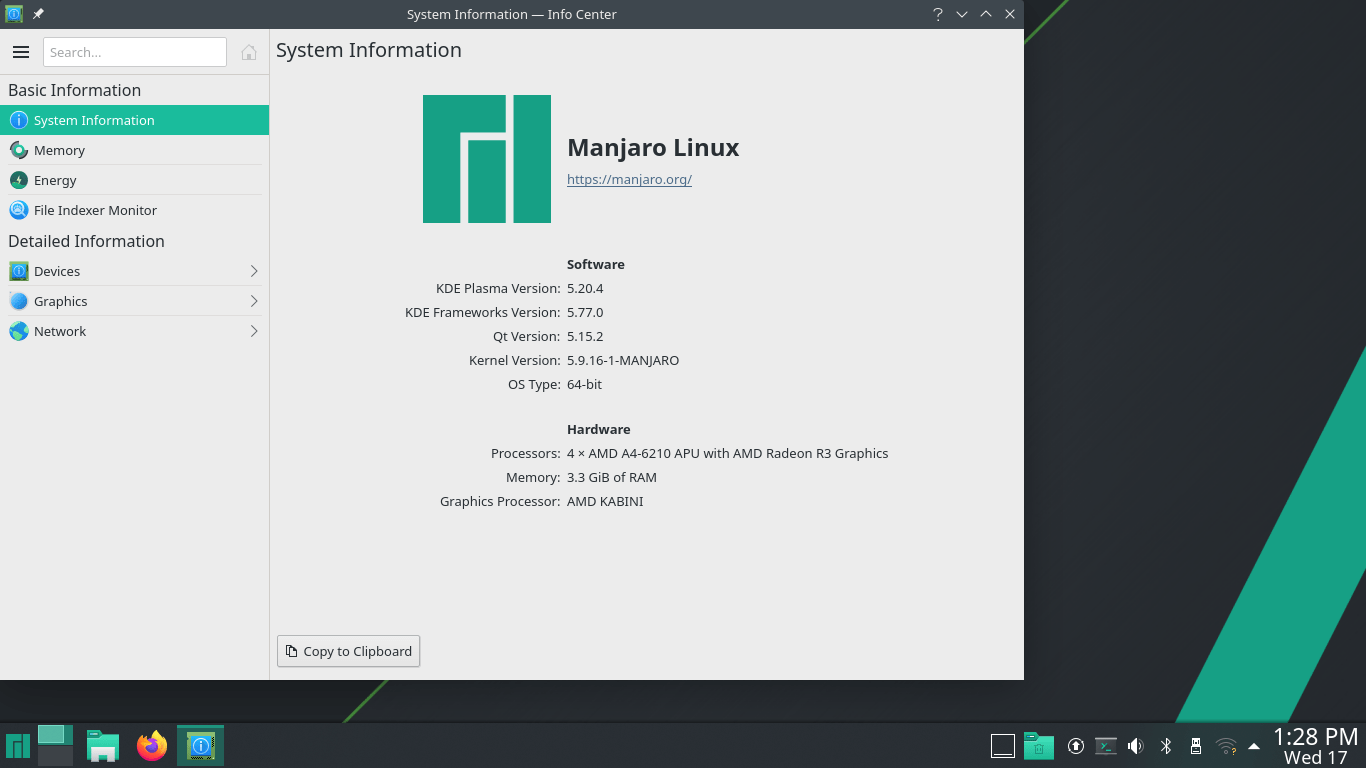 The Arch Linux-based OS is running on KDE version 5.20.4 version, which brings stability & optimal performance. Manjaro is known to be a heavy distribution that requires hardware juice to run programs and applications.

However, the result is not the same as KDE is the backbone of the Majaro Linux. The operating system consumes 590MB and 20% CPU at idle state. The numbers do change depending on the background running apps and what’s being downloaded or uploaded in the digital world. 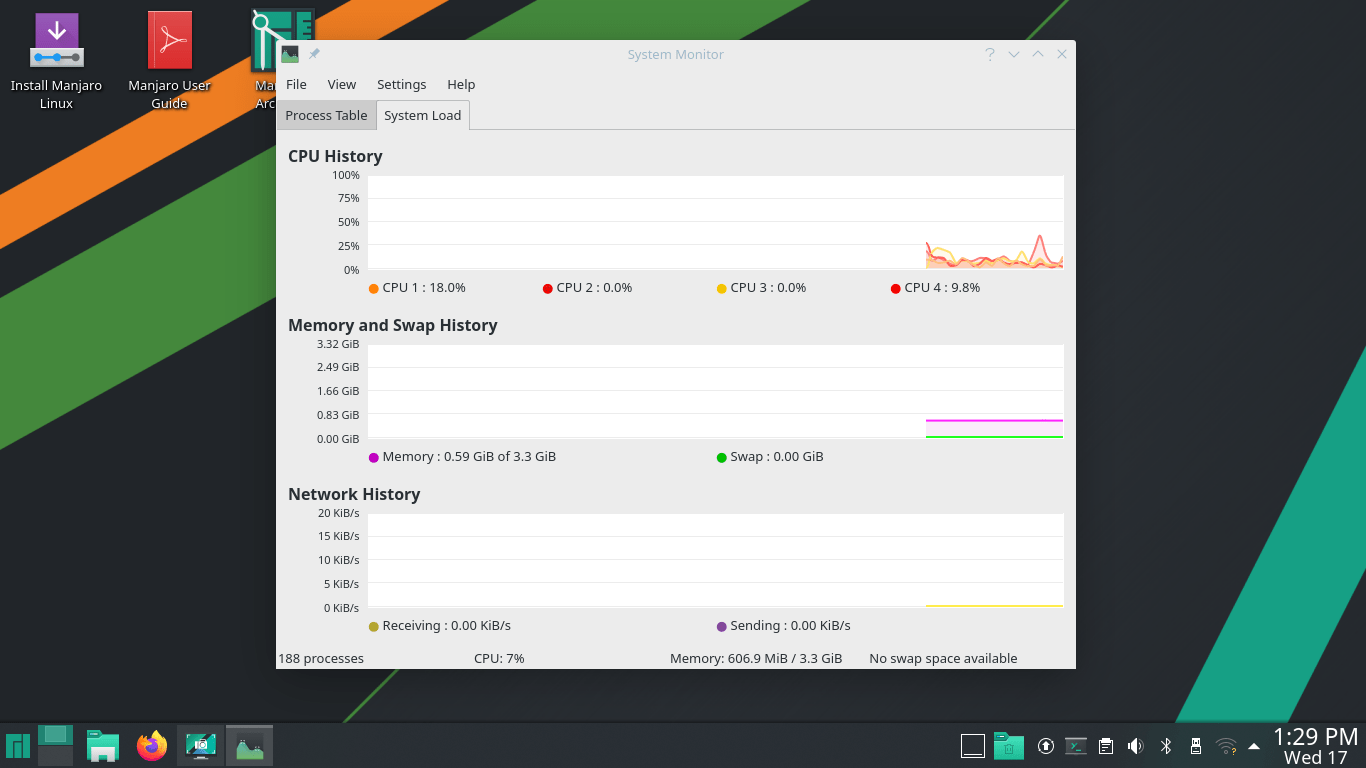 Users can install programs from the inbuilt Store, and it supports the latest Snap & Flatpak resources. You don’t have to install the Store integration manually because it is available within the system. The developers understood the current demands of the existing user base and introduced “auto-updates” from Snap & Flatpak.

A power user might find a couple of drawbacks in Manjaro KDE, but this is not a deal-breaker.

KaOS is another fruit of the KDE Plasma 5 version, and it is an interesting flavor for like-minded users. KaOS is an eye-candy software because it follows a unique pattern and does not copy most of the distributions.

The KDE distribution developer has placed the main panel on the right side and painted it with pure-white color. The makers have chosen to add a custom pack of icons that covers the entire software, so you will feel privileged. 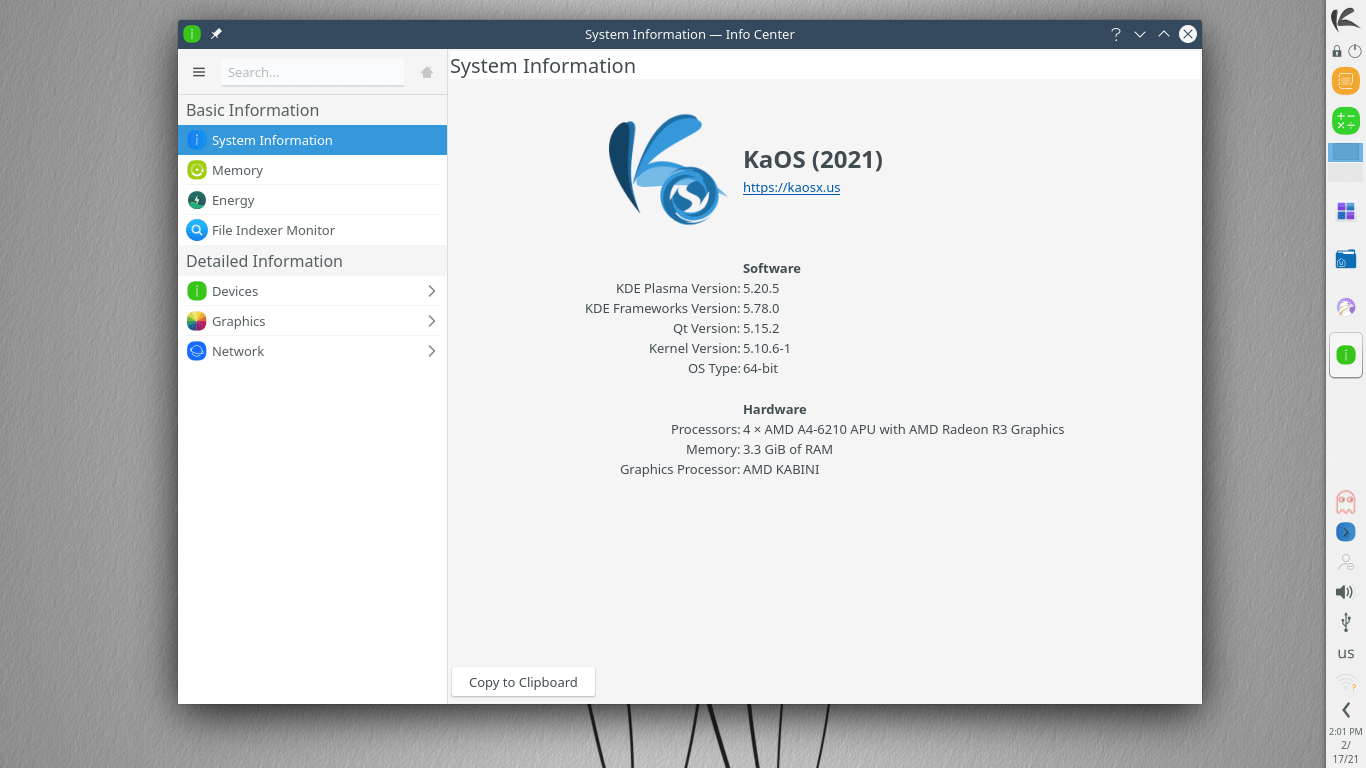 You can install Debian or Ubuntu-based programs from the Store, so there are no limitations here. Users don’t have limitations here, but we have to say that it doesn’t have a stable Store. The inbuilt Store loads the information slowly and installs the programs slowly, which is a limitation. We recommend the users move to Flatpak because they have a straightforward interface and works like charm.

The developer added tons of programs & tools to the software. KaOS has tons of bloatware, and we did not like the number of applications pre-installed in the machine. The good part is that you can uninstall all of them manually from the distribution. 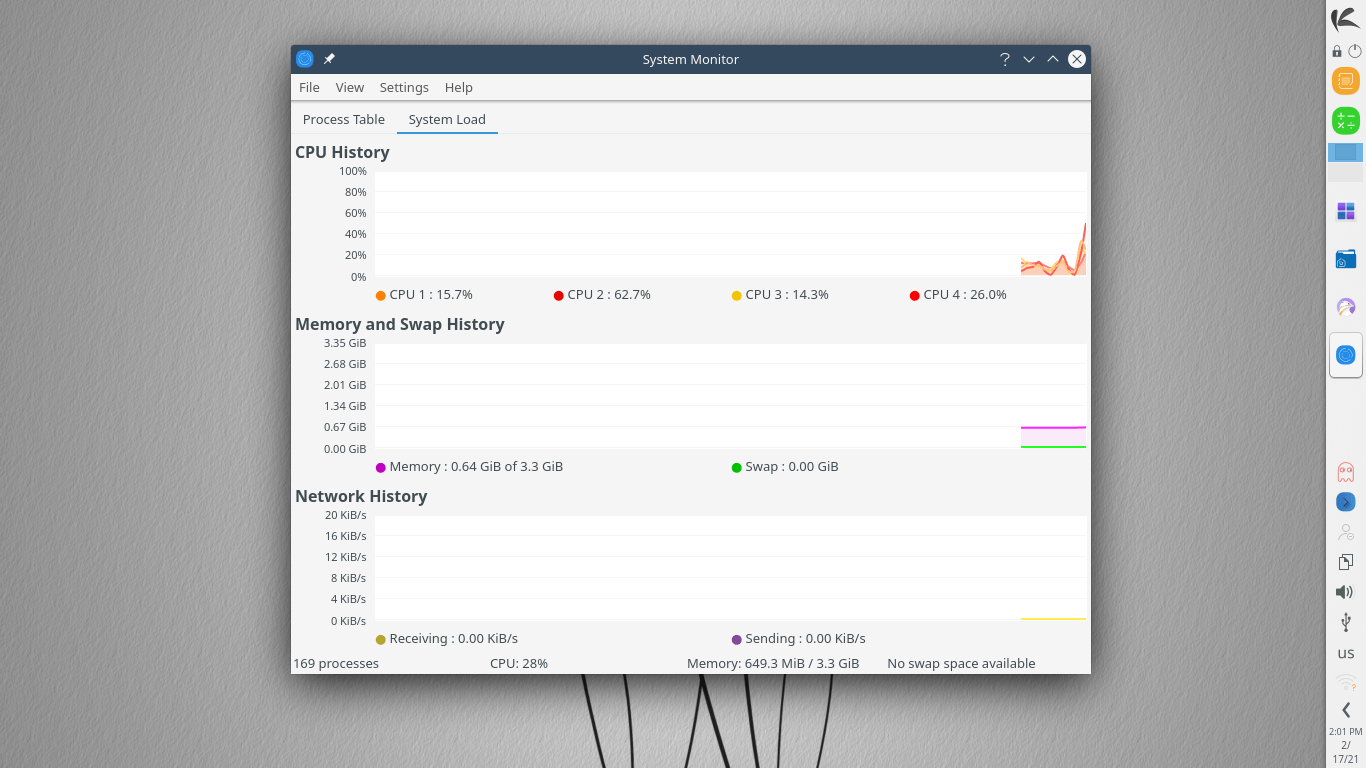 KDE Plasma 5 is a stable & high-performance framework, and KaOS took advantage of the latest developments. The KDE distribution consumes 640MB RAM and 15% CPU in the idle state that makes it a lightweight software.

KaOS is an interesting KDE Plasma 5 flavor that everyone should try without installing it.

Here’s our list of KDE Plasma 5 based distributions that everyone should try once. We recommend the users to try Kubuntu & Feren OS because they bring the utmost unique & clean KDE distribution to the table. Let us know what do you think about KDE Plasma 5 in the comment section below.

If you've any thoughts on Best Linux Distributions for KDE Plasma 5, then feel free to drop in below comment box. Also, please subscribe to our DigitBin YouTube channel for videos tutorials. Cheers!