Skip to content
A complete study of how T-Series is fighting Pewdiepie to become the most subscribed YouTube Channel in the world. T-Series biggest Channel. 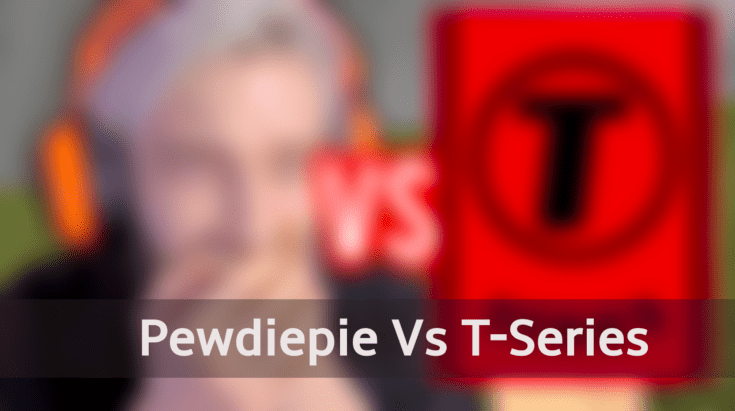 2T-Series, living in western countries, you surely would not have heard of this name. T-Series in an Indian Channel which can be dubbed as ‘Vevo’ of Indian Music. The Channel is growing so fast that it would take only a couple of months for it to overtake the Pewdiepie. T-Series YouTube channel is the most-viewed channel in the world, with over 45+ billion views (and counting).

“T-Series to Dethrone Pewdiepie to Become Biggest YouTube Channel in the world”. So, What is T-Series? How it became such a huge thing? And what more to expect? Here are all the things which you need to know about the Big Internet Battle.

T-Series is an Indian Music and Movie Production Company which primarily deals with Bollywood Music and Regional Indian Content. It holds the music rights for movies and individual albums. Songs are recorded by top Indian artists and musicians with added cinematic visuals to appeal to the audience. T-Series is basically a family-owned company dating back to the 1980’s, after the initial struggling phase, the company slowly started establishing itself and by the year 2000, it became a top provider of Indian Soundtracks. Currently, Bhushan Kumar and Krishan Kumar lead the company.

How is it different from Pewdiepie?

Unlike Pewdiepie which is run by Felix Kjellberg, who makes the video game and Let’s play commentaries and vlogs. T-Series is not run by an individual but is controlled by a production house. So, you should not expect any sort of video confrontation from T-Series. As it’s not like T-Series is a specific person who can actually duke it out with Kjellberg in the way that he and his fans suggest.

Felix in his video jokingly said, “The time has come for us to fight back” rallying on his fans to give a big fight to T-Series. This show of antipathy will not give anything for those expecting an internet storyline for the big fight like Paul Logan Vs. KSI. T-Series is not likely to make any response video to fight back against all the crushing comments which are being filled on T-Series new uploads by The Bro Army.

According to Social Blade, Pewdiepie will gain ∼10 million Subs by next year and in the same time period, it is estimated that T Series will make around ∼40 million Subscribers. That’s a crazy number as there are only 3 channels with more than 40+ million subscribers in total. So, you can imagine how fast the T-Series is growing.

T-Series is soon going to overtake the Pewdiepie in sub count. The growth is exponential and if this continues, it would touch the magic figure of 100 million subs by next year.

The rate of Subscribers Adding to the Channels

According to data aggregating site Social Blade, the Subscribers adding to the T-Series are ∼200,000 subs/day which when compared to Pewdiepie are only ∼30,000/day.

The average daily views of the channels are incomparable at a microscopic level. The Pewdiepie gets around 5 million views per day whereas T-Series garners mammoth eyeballs of approx. 100 million views on a daily basis making it the most viewed YouTube Channel in the world.

Growth Forecasting for Both Channels

If this growth rate for both the channels pertains than by start of the next year, the T-Series will make around 85+ million subscribers in total while Pewdiepie will make 72+ million subs.

Face Off in Future

The T-Series is growing so insanely rapid that it would be difficult for any channel to give any real tough competition.

So, T-Series is a music channel which uploads video songs on YouTube, nothing much surprising. There are 1000’s of YouTube Channels which do the same thing but they are not growing at the rate the T-Series is up to. Even taking into the consideration the quality of content it has but that does not satisfactorily explain why such a spiking growth even though the Channel joined the YouTube back in 2006. The reason could be the same as for the success of PewDiePie.

Felix had a unique advantage based on where he was from. Basically, Pewdiepie was able to draw from a larger audience for his content from the countries like the UK, Sweden, US and Mexico having a combined population of ∼ 430 million with internet penetration of 70-75%. The same geographic advantage is helping T-Series to grow in India.

With ∼1.3 billion people, India is a right place for any YouTuber who wish to ‘sell’ his content. Also, Bollywood is very popular across the globe and said that for the people all over the world who love Bollywood songs, the T-Series is relinquishing their music thirst. Apart from India, Indian Content is very popular in the Middle East, Africa, Some European Countries and North America. Having such a huge fan base, the T-Series has hit a right chord by garnering the audience from around the world by providing high-quality content.

Where was India this Long?

India always had a huge population. But what held India back in past was poor or no internet connection, high price for data and slow internet speeds. But this changed in the past 5 years due to the introduction of the very low-cost internet, cheaper smartphones and high-speed 4G services. Now, the country is craving for more quality content. India has around 200 million monthly Active Youtube users which make a huge number.

“The content ecosystem has matured in the last year due to improved internet access. With over 300 million smart-phone users in the country, creators are coming from tier-2 and -3 cities,” David Powell, Director, Online Partnerships and Development, YouTube, APAC, told BusinessLine.

The watch time increased 100× and the number of YouTube Channels also increased to fulfil the variety of interests of Indian Audience. India even surpassed the US in monthly internet usage with 1 exabyte/month to become the highest consumer of data. 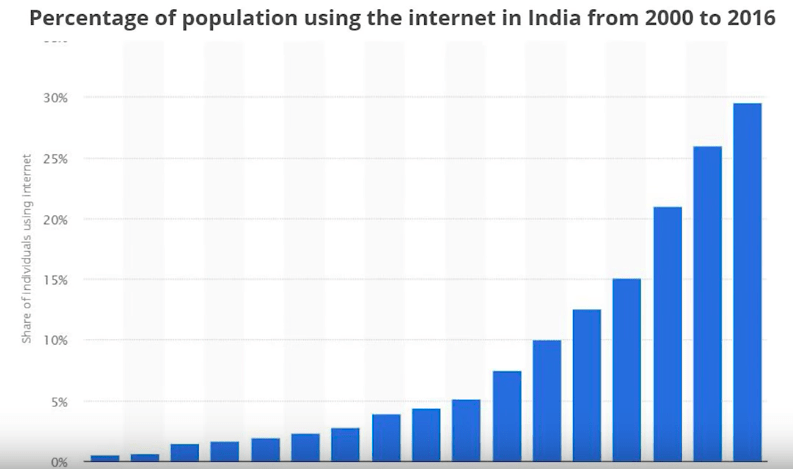 The growth of Internet Users in India by Year

This sudden penetration of internet users in India led to the success of T-Series which had its presence over YouTube from 2006. Every day new users log on to YouTube and T-Series is soaking them to grow larger by each passing day.

This is a popular vibe used by any content marketer to explain things in better fashion. In the US there is a saturation of content, there is no much scope for generation something exceptionally new. But India on other hand is young and people are hungry for more content. Thus making it several years younger than most of the developed countries. This created a unique moment. For a professional card like T-Series which can produce and sell big-budget music videos, it gave the opportunity to dominate the market and gain a good percentage of share before anyone else takes the charge in competition.

Conclusion: India is soon going to conquer the internet with its vast population and content hungry people. The T-Series is just a small example of how fast a channel with Indian Interest could gain the subs. Cheap data, cheaper smartphones and top content all are making the T-Series a very successful YouTube Channel.